Greetings from the French team !

Hello ! Bonjour !
We are the French team for the school year 2012-2013 !
There are thirteen of us in our English class. We are in Year 10 at Collège Antoine Coysevox near Montmartre in the north of Paris. We are from France (Paris, Corsica, Brittany), but our families are also from England, the Ivory Coast, Congo, Guinea, Mexico, Morrocco, Algeria, Sri Lanka and Serbia. We are five girls called Victoria, Oumou, Jeanne, Emilia and Anna and eight boys called Vincent, Aniss, Joachim, Faysal, Georges, Thanushan, William and Charles. Our English teacher is Mrs Serdar and we are in our fourth year of English.
We have English on Tuesday, Thursday and Friday so three times a week. We also study Spanish, as a second language and seven of us take latin. English and Spanish are compulsory but latin is optional. In Year 7, students must choose between English or German and in Year 9 we must choose a second language (Spanish, German or English). There are twenty-eight pupils in our class but fifteen students study German as a first language and English as a second language with another teacher.
Our school is not very big. It has about five hundred students. It has two buildings, two playgrounds, a canteen and a gymnasium. Seven of us have lunch at the canteen (we don't find the food very good) and the others eat at home. We have an hour and a half for lunch.

A view from one of the buildings onto the other building and one of the playgrounds : 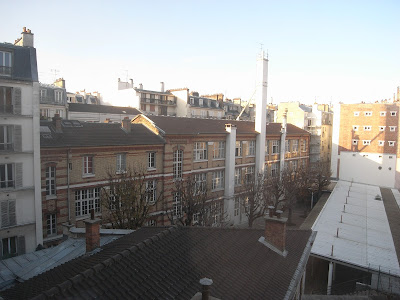 Our English classroom is on the second floor.

Here is our timetable : 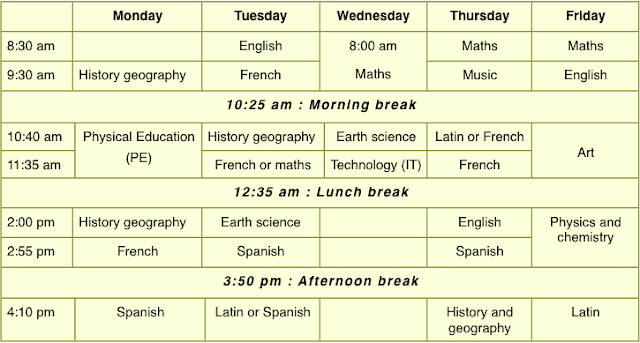 Published by the French team. 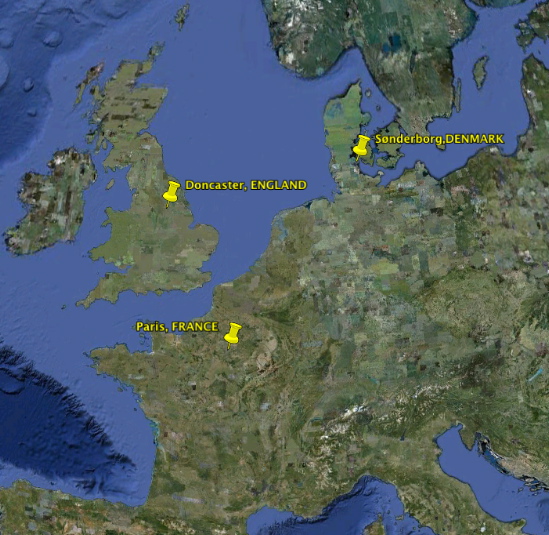 The DEF team :
the Denmark-England-France team is composed of :
The Danish team at Nydamskolen in Vester Sottrup, Sønderborg, Denmark.
The English team at Outwood Academy Adwick , Doncaster, England.
The French team at Collège Antoine Coysevox in Paris, France.